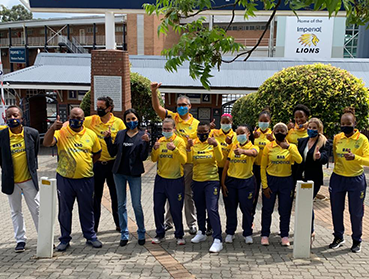 Johannesburg; The Central Gauteng Lions (‘CGL’) is excited to announce that Imperial has secured the naming rights for the Central Gauteng Lions Senior Women Provincial Team as well as the Women Saturday Premier League and Presidents League Club Cricket. This is an extension of the Imperial Wanderers Stadium and the Imperial Lions men’s professional naming rights partnerships.

Just over a year ago, Imperial and CGL announced their long-term partnership in the development of sport as a leading factor that unites nations and its people   and likewise reinforces Imperial’s commitment to advancing women in sport.

“At Imperial, our passion for the competitive and collective spirit sport embodies is matched by our passion for empowerment and diversity,” says Imperial Group CEO, Mohammed Akoojee. “This partnership aptly captures both of those passions and we are accordingly proud to be the part of the journey of these talented and inspiring women.”

“The extended partnership reaffirms the commitment by both parties to not only create passion for cricket across all genders, equality but use the sport as a vehicle to drive social change and economic development” commented Central Gauteng Lions CEO Jono Leaf-Wright.

“As the Union, we are truly honoured for the extended the partnership that will go towards the much needed women pipeline structures” concludes Leaf-Wright.