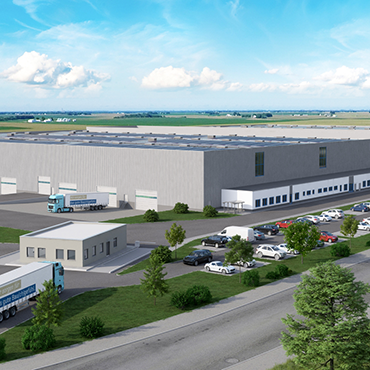 Imperial has been appointed to handle outbound logistics for thyssenkrupp Schulte at its new site in Rotenburg (Wümme), located between Hamburg and Bremen, Germany.

thyssenkrupp Schulte is a producer-independent materials distributor and service provider specializing in steel, stainless steel and nonferrous metals. It is market leader in Germany, where it runs over 40 locations serving more than 70,000 customers in the industrial, engineering and construction sectors.

The new, state-of-the-art Rotenburg logistics center, which is currently under construction, is key for serving their sales region in Northern Germany. Imperial will manage all aspects of the company’s transport operations including yard management, loading vehicles and distribution to thyssenkrupp Schulte’ customers throughout the surrounding region. Initial volumes will involve over 700 deliveries per day, rising steadily.

The contract assignment follows the successful implementation of a smaller contract covering the company’s Rheine location, which began in late 2019. The experience gained in this operation has enabled Imperial to better understand thyssenkrupp Schulte’ requirements for its new Rotenburg operation. Tendering for the new contract involved the close collaboration of Imperial’s Industrial Industry Vertical and Road division.

Says Tobias Hegmanns, COO SCM + Logistics at thyssenkrupp Schulte: “We were looking for a partner to service our customers in the North of Germany reliably and efficiently on the last mile. During the tendering process Imperial was very solution-oriented and professional. We are very much looking forward to intensify our cooperation with Imperial. They act on the background of their large scale service network and bring in the right capabilities in IT, project and process management.”

Adds Sandro Knecht, CCO at Imperial’s International business: “We are delighted to have been appointed to handle this lighthouse project, which is unique in the materials trading industry due to the degree of automation involved, and the use of digitized planning.

“With our already successful implementation at Rheine, we believe we are well positioned to build further on this relationship, and so assist thyssenkrupp Schulte in streamlining its logistics operations on a wider basis.”

The new contract aligns with Imperial’s business development strategy, which will see it further strengthen its logistics presence in key verticals including industrial, automotive, consumer, healthcare and chemicals.