Imperial reinforces its commitment to road safety during Transport Month 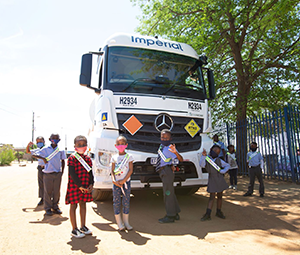 Imperial's key initiatives to drive road safety in South Africa, including its annual ‘Car Seats for Kids' initiative, in partnership with Wheel Well and 947, as well as providing ‘walking seatbelts' to underprivileged children, in partnership with the Bakwena N1N4 Toll Route Concessionaire, have begun to commemorate Transport Month this October.

"As a significant user of roads and as part of our commitment to ensuring the safety and wellbeing of our drivers, communities and future generations, Imperial continues to give the gift of safety to ensure that we are a part of the change that we want to see on our roads," says Esha Mansingh, Executive Vice President of Corporate Affairs & Investor Relations at Imperial.

Niki Cronje, Imperial's Vice President of Marketing, Sponsorships & Brand adds, "As travel restrictions are easing, we are likely to see a strong increase in road usage which makes restarting and enforcing such campaigns a critical step in ensuring safer roads for South African road users."

"This year, we have partnered with 947 to get as many car seats donated as possible and we are calling on everyone drop-off new or used car seats directly at any Supa Quick outlet or at Wheel Well," says Cronje.

"The ‘Car Seats for Kids' campaign supported by Imperial, Supa Quick and 947, addresses both issues and will help us make huge strides toward seeing every kid, in every car, in a car seat. We are extremely grateful for the commitment these partners continue to show for children in road safety," says Peggy Mars, Founder of Wheel Well.

"At Bakwena, road safety is our priority when it comes to building, maintaining and upgrading the N1N4 route, including the safety and well-being of the communities that reside alongside it", says Solomon Kganyago, Chief Operating Officer at Bakwena. "This road safety initiative is one of the many projects that we roll-out within the schools along our route, not just during Transport Month but throughout the year".

"There is no doubt that our children are our most precious cargo and as a leading player in the transport sector, Imperial has an important role to play in driving change. We are really proud to be able to continue with our focus on road safety this Transport Month," concludes Mansingh.