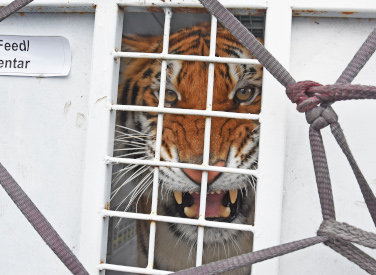 Seventeen big cats rescued from suffering and abuse in circuses in Guatemala have been given a new home at a wildlife sanctuary in South Africa. Imperial is proud to have contributed to Animal Defenders International’s (ADI’s) heart-warming rescue mission by sponsoring the trucks that transported the 12 tigers and five lions to their new home in the Free State.

Dubbed Operation Liberty, the animals’ journey to freedom was the culmination of 18-months’ work by ADI, during which the organisation assisted authorities with the enforcement of Guatemala’s animal circus ban.

“Imperial supplied four eight-ton crane vehicles and a four-ton vehicle to move the big cats from OR Tambo International Airport to ADI’s secret sanctuary in the Free State after their long flight to freedom,” reports Esha Mansingh, Imperial’s investor relations and communications executive.

The animals’ epic journey began at the ADI Temporary Rescue Centre in Guatemala, where they had been cared for since their rescue. One by one, the 17 big cats were coaxed into their individual travel crates. Once secured and given time to settle, their journey got underway. The travel crates were lifted onto trucks which transported the animals to La Aurora International Airport in Guatemala City and onto the Operation Liberty flight.

During the flight - which made stops in Mexico, Belgium, and Qatar en route to the final destination in South Africa - the big cats were monitored by a veterinarian and provided with in-flight meals and water by ADI founders and rescue team leaders Jan Creamer and Tim Phillips. After more than 34 hours of flying, the animals touched down at OR Tambo International Airport in Johannesburg to an eager audience of reporters, wildlife sanctuary and airport staff - as well as Imperial staff, drivers and crane operators. For the final leg of their journey home, they travelled in Imperial trucks to the 455-acre ADI Wildlife Sanctuary.

“These big cats, once confined to bare cages about the size of a queen size bed, can now enjoy natural grassland enclosures with trees and bushes, platforms, dens, and night houses,” comments ADI president Jan Creamer. The “Tiger Territory” features a series of spring-fed pools for the tigers to play in. All of the animals have received veterinary treatment since being in ADI’s care. Several required dental surgery to repair damaged teeth and some of the cats’ feet had been mutilated to remove their claws.

“These animals have experienced a lifetime of suffering and abuse in circuses but those days are over,” Creamer says. “At the ADI Wildlife Sanctuary, our place of loving kindness, the tigers and lions can run, play, and explore their wonderful, natural surroundings under the African sun. We could not be happier for them and are enormously grateful to every individual and company that helped to make Operation Liberty a reality.”