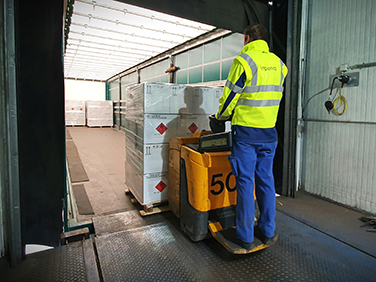 Imperial has supported chemicals manufacturer Schirm in the storage and distribution of urgent hand sanitiser supplies destined for local authorities and healthcare workers. Imperial had successfully set up all operations within 24 hours of the initial request.

Imperial is now transporting the hand sanitiser – a Class 3 hazardous material - from two Schirm production sites to a local authority in Hamburg, to the state procurement body’s regional distribution facilities, and direct to hospitals.

In addition, Imperial’s hazmat warehouse facility at Schönebeck has also provided Schirm’s Wolfenbüttel plant and the state procurement department with overspill storage, as well as handling all road transfers between sites.

Imperial’s Wolfenbüttel hazmat facility have made 40 deliveries totaling 616,000 litres of sanitiser within the first 14 days; around half of these drops were executed outside normal business hours. Meanwhile, Imperial’s Schönebeck hazmat facility stored 600 pallets of the disinfectant during the first week of operations.

Says Thomas Holzberger, Vice President Operations Chemicals: “We are delighted that – thanks to the size and capacity of Imperial’s hazmat warehousing and transport network throughout Germany – we were able to respond quickly and effectively to this appeal for urgent assistance, despite the current general shortage of suitably-certified hazmat storage facilities.“Because of the urgency of distributing the sanitiser, its transport involved a high proportion of late night and weekend deliveries – but our staff were only too happy to work outside normal hours to get the job done.”

He concludes: “Once again, we are proud that Imperial has been able to play a modest role in the fight against this pandemic, by supporting our wonderful healthcare and frontline workers with essential supplies that enable them to keep working safely.”