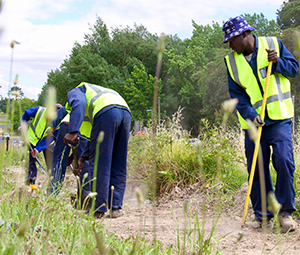 Yesterday, Imperial in partnership with Trails South Africa (Trails SA), proudly celebrated the official opening of the first section of the planned 6,000km trail network in the Western Cape. Earlier this year, Imperial announced this partnership with Trails SA, a non-profit company engaged in developing an adventure tourist network in South Africa, on its Trails Western Cape project. This community development initiative, which is supported by the Western Cape government, focuses on linking existing trails to create a network that will not only create jobs and provide a safe walking option for pedestrians within connecting communities, but will also bring much-needed adventure tourism revenue to the area.

"When we set out on our partnership with Trails SA to support the development of these trails, connect communities safely and give local residents employment opportunities, we envisioned a network of trails that is underpinned by empowerment and community development," said Mohammed Akoojee, Group Chief Executive Officer at Imperial. "As a purpose-driven organisation, we are committed to creating and sustaining value in our countries of operation, including developing the communities in which we operate. We are delighted to see that this initiative is already delivering on our vision so soon after inception."

"To date, 3,800km of trails have been linked, with over 100 people employed in both contract and permanent positions, and hundreds of businesses on route have started benefitting from the trails," said Reghard Goussard, co-founder of Trails SA. "The economic multiplier effect of this project in the community is significant, with the wages received being used to buy other essential goods and services from small, local businesses."

In addition, 22 trail rangers have been permanently employed to maintain the trails and offer support to trail users. They ensure that people purchase permits to ride the trails, help repair broken bicycles, and offer assistance to anyone who needs medical attention.

The Premier of the Western Cape, Alan Winde, who commemorated the launch, said: "I want to commend Imperial and Trails SA, who are going above and beyond to connect our communities through the linking of trails. This is a wonderful, immediate boost for job creation in our province, while simultaneously developing our ecotourism infrastructure for the future. This will no doubt enable sustainable economic growth as our tourism sector recovers and expands. I thank them for this initiative, and I am confident that this initiative will be a great success."

Imperial also proudly announced a two-year sponsorship of the Fairtree Cannondale Racing Team, which will now be known as the Fairtree Imperial Cannondale Racing Team, at the event yesterday. This accomplished mountain biking team, whose members are men and women from the local communities surrounding the trails under development, have been given the opportunity to demonstrate their talent on a global stage.

The Imperial sponsored trails in Franschhoek are patrolled by the Fairtree Imperial Cannondale Racing Team, known to locals as the 'Banhoek Rangers'. "We are pleased to play a role in helping this team succeed – not only in the great work they are doing on the trails, but also in their chosen sport – an important area of CSI development for Imperial," said Akoojee.

Chris Norton, Team Manager of the Fairtree Imperial Cannondale Racing Team, added: "The team is a positive example of how sport has the power to unite communities and change individual circumstances, as it has done with these incredible riders. We are proud to have Imperial on board as a partner, which will no doubt take the team to another level and allow them to reach their full potential. In addition, the partnership with Imperial will provide the team with much-needed transport for tours and allows them to continue the important work they are doing with Trails SA."

These projects drive development in the form of infrastructure, employment, healthy living and business and skills development, and Imperial is excited to see the first phase of this new trail network already attracting visitors and making a positive impact in the community.

"It is not only driving community development as intended, but it is also providing local communities with a sense of pride and ownership of the trails network, which will positively influence the success of the project in years to come," concluded Akoojee.